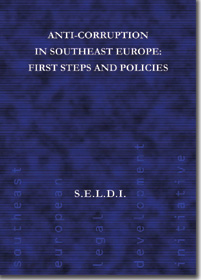 Contributor(s): Alexander Stoyanov (Editor), Boyko Todorov (Editor), Emil Tsenkov (Editor), Maria Yordanova (Editor), Marko Hajdinjak (Editor), Ognian Shentov (Editor)
Subject(s): Politics / Political Sciences, Social Sciences, Law, Constitution, Jurisprudence, Criminal Law, Civil Law, Sociology, Applied Sociology, Economic development, Law on Economics
Published by: Център за изследване на демокрацията
Summary/Abstract: The main goal of the Report is to sensitize politicians and civil society to the specific set of sources of corruption in the region. The first part analyzes the origins of cross border corruption in the region which is seen as a result of the rise of transnational crime caused by the violent break-up of former Yugoslavia. It intends to show that regional factors significantly contribute to national-level corruption and could undermine national anti-corruption efforts. In the second part, the report evaluates the national circumstances in which the regional factors develop. It compares the national legislation and institutional practice in a number of areas critical to anti-corruption efforts: regulatory and legal framework, institutional prerequisites, corruption in the economy, the role of civil society and media and international cooperation. The second part is ultimately a collection of contributions from watchdog organizations in the countries in Southeast Europe. In fact, the nature of regional concerns about corruption is evident in the limitations of this report – namely that the level of institutional development, policy implementation practice and international affiliations of the countries in SEE are varying to such a degree that only a “bird’s eye view” could reveal the source of common problem. This was very much in line with the USAID approach that there is a strong conceptual distinction between law enforcement approaches to corruption, which try to strengthen crime-fighting efforts, and a more holistic approach that addresses poor governance systems more broadly. The countries covered by the RCAR included Albania, Bosnia and Herzegovina (BiH), Bulgaria, Croatia, Macedonia, Romania and Serbia.