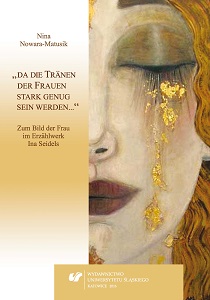 Author(s): Nina Nowara-Matusik
Subject(s): Politics / Political Sciences, Philosophy, Language and Literature Studies, Gender Studies, Cultural history, Studies of Literature, Sociology, History of ideas, Gender history, Comparative Study of Literature, German Literature, Contemporary Philosophy, Politics and society, Culture and social structure , History and theory of sociology, Theory of Literature
Published by: Wydawnictwo Uniwersytetu Śląskiego
Keywords: Ina Seidel; picture; woman; motherhood; Weimar Republic; prose; Bachofen; Simmel; feminism; German literature; Helene Lange; Gertrud Bäumer
Summary/Abstract: The literary works of Ina Seidel, the author of one of the best-selling books in the history of German literature, the novel “Das Wunschkind”, are slowly sinking into oblivion. Called „Ernst Jünger in a skirt”, the writer did not hide her sympathies for the fascist ideology, which also echoes in her works. Not surprisingly, in previous literary studies, her writings were perceived, as a rule, through the prism of criticism of ideology and situated in the context of the literature of the Nazi Germany. // However, the starting point for our dissertation is different. Shifting the research paradigm, in the theoretical part the author sums up the gender theories existing at the time of the Weimar Republic, which was also the period when most Ina Seidel’s texts were written, texts to which the main body of this dissertaion is devoted. These theories constitute a conceptual foil for the analyses conducted in its further part. The concepts discussed are founded on the model of differentiality. The author alludes to the matriarchy theory by the Swiss anthropologist Johann Jakob Bachofen, the notions of feminity and masculinity by the German sociologist Georg Simmel and views on a woman’s role in society from leading representatives of a moderate wing of the feminist movement in Germany – Helena Lange and Gertrude Bäumer. // The analytical part of the dissertation carries an argument focused on the women characters created by Seidel. They are protagonists of both the foreground and the background, representing various types of womanhood: mothers, wives, single women, femme fatales, artists, women professionals and scholars. By way of these, Ina Seidel explores some of her central topics related to being a woman: maternity, childlessness, moral mission of a woman and her role in society. The close reading of her novels leads to the conclusion that the writer applies a specific aesthetic of a „squinting look”. The German literary critic Sigrid Weigel uses this metaphor in reference to the writings of women who, accepting the traditional patriarchal models of gender and moving within the frame of these, simultaneously search for the ways to articulate their own, specifically feminine experiences. On the one hand, Ina Seidel’s narration follows the conservative model of thinking about a woman, typical of her times, in which the superior category is motherhood. On the other hand, however, it indicates that, paradoxically, it is motherhood that can become a woman’s weapon and a starting point for her emancipation.