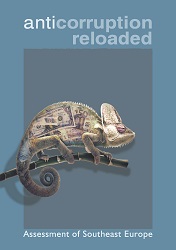 Contributor(s): Ognian Shentov (Editor), Ruslan Stefanov (Editor), Boyko Todorov (Editor)
Subject(s): Politics / Political Sciences, Politics, Social Sciences, Law, Constitution, Jurisprudence, Sociology, Economic policy, Government/Political systems, Security and defense, Welfare systems, Social development, Criminology, Studies in violence and power, Victimology, Welfare services, Economic development, EU-Accession / EU-DEvelopment, Social Norms / Social Control, Penal Policy, Sociology of Politics
Published by: Център за изследване на демокрацията
Keywords: Anti-Corruption; Corruption; Southeast Europe; SELDI; victimisation; crime; CSD; Center for the Study of Democracy
Summary/Abstract: Corruption in Southeast Europe has been in the news, in the focus of public debate, and on the policy agenda of national and international institutions so often and for so long that its scrutiny hardly needs to be justified. It is precisely because it has proven to be such an intractable issue that innovative approaches to its understanding – and hence its reduction – are warranted. The EU accession prospects for the countries in the region – though distant – provide an enabling framework for action but it is local stakeholders, and in particular civil society who can bring about sustained progress in anti-corruption. The Southeast Europe Leadership for Development and Integrity (SELDI) has made the in-depth diagnosing and understanding of corruption and governance gaps in the region one of its main priorities, as a requisite condition for its advocacy of knowledge-driven anticorruption policies. This SELDI report fits in the development and implementation framework of the emerging regional anticorruption policy and infrastructure as exemplified by the SEE2020 Strategy’s Governance Pillar run by the Regional Anti-Corruption Initiative. Despite some important achievements – mostly with respect to the stabilisation of democratic institutions, the adoption of laws in key anticorruption areas, a reduction in petty bribery and growing public intolerance of corruption – anticorruption and good governance reforms are not consolidated, corruption among elected politicians and judges seems to be increasing and the enforcement of anticorruption legislation is haphazard. Anticorruption policies and institutions in the region will benefit immensely from the adoption of regular and accurate victimisation-survey based tool for measuring corruption and the rate of progress in good governance, similar to the special Eurobarometer on anticorruption, UNODC’s SEE monitoring of corruption and organised crime, and the Corruption Monitoring System employed by this report.