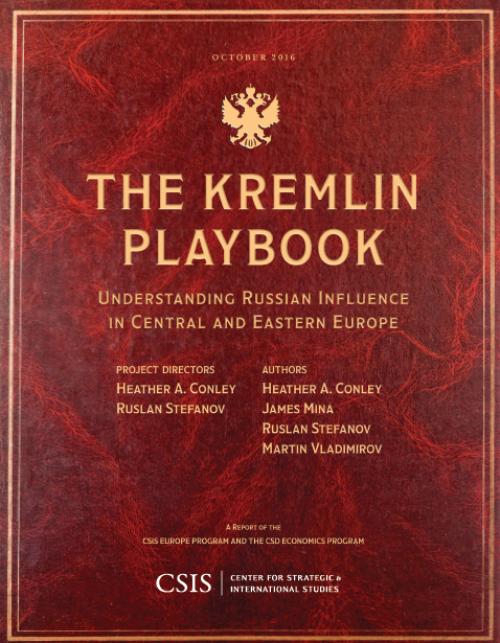 Author(s): Heather A. Conley, Ruslan Stefanov, Martin Vladimirov, James Mina
Subject(s): Politics / Political Sciences, Politics, Social Sciences, Economy, National Economy, Supranational / Global Economy, Civil Society, Sociology, Social development, Nationalism Studies, Economic development, Financial Markets, Sociology of Politics, Globalization, Socio-Economic Research, Geopolitics
Published by: Център за изследване на демокрацията
Keywords: Kremlin; Russia; Influence; Central Europe; Eastern Europe; NATO; European Union; CSD; Center for the Study of Democracy; CSIS; Center for Strategic and International Studies; Kremlin Playbook
Summary/Abstract: There was a deeply held assumption that, when the countries of Central and Eastern Europe joined NATO and the European Union in 2004, these countries would continue their positive democratic and economic transformation. Yet more than a decade later, the region has experienced a steady decline in democratic standards and governance practices at the same time that Russia’s economic engagement with the region expanded significantly. Regional political movements and figures have increasingly sought to align themselves with the Kremlin and with illiberalism. Central European governments have adopted ambiguous—if not outright pro-Russian—policy stances that have raised questions about their transatlantic orientation and produced tensions within Western institutions. The Center for the Study of Democracy, in partnership with the Washington-based Center for Strategic and International Studies (CSIS), recently concluded a 16-month study to understand the nature of Russian influence in five case countries: Hungary, Slovakia, Bulgaria, Latvia, and Serbia. This research determined the extent of the Russian economic footprint in the domestic economy, which has ranged between 11% and 22% on average from 2004 to 2014. The report also presented evidence of how Russia has leveraged its economic presence to cultivate an opaque web of economic and political patronage across the region that the Kremlin uses to influence and direct decisionmaking. This web resembles a network-flow model—or “unvirtuous circle”—which the Kremlin can use to influence (if not control) critical state institutions, bodies, and economies, as well as shape national policies and decisions that serve its interests while actively discrediting the Western liberal democratic system. To exploit the governance loopholes, Russia’s strategy has been to capture powerful local brokers through providing them with government sponsored business opportunities at premium returns infiltrating them in state-owned companies, national agencies including in the security sector. Another common way is to use former security officials with significant influence over parties, businesses and institutions to act as intermediaries boosting Moscow’s interests where necessary. The reverse has also been happening in the region when local powerful economic groups use their Russian links to secure capital and political backing to acquire assets and invest in large projects. Sometimes domestic interests have vied for and received the economic and political support from Russian companies or politicians to engage in rent seeking with the local government, exploiting lack of oversight and lack rule of law. In exchange for providing their brand name or capital, Russian companies have taken nominal share in lucrative domestic businesses, gained access to a strategic asset in telecommunications, finance and most often in energy.