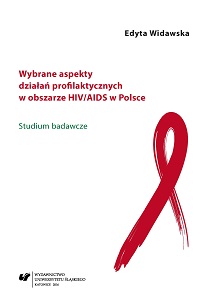 Author(s): Edyta Widawska
Subject(s): Social Sciences, Education, Sociology, Health and medicine and law
Published by: Wydawnictwo Uniwersytetu Śląskiego
Keywords: HIV; AIDS; pro-health strategy; Poland; preventative strategies
Summary/Abstract: The issue of HIV/AIDS is an essential aspect of the discussion about health-related strategies on a global and local scale. According to the data UNAIDS for the year of 2015, the number of people who are aware that they are infected with HIV and recognize their status is approximately 36.7 million all over the world. In Poland, since the beginning of the research in 1985 to 29 February 2016, the incidence of HIV infection had been found in 20,169 people. The estimated data of the National Centre for AIDS indicate, however, that the number of people infected with HIV is much higher and ranges between 36 and 45 thousand people. This puts our country at the forefront of the European Union countries in terms of the number of infected people who are not aware they have contracted this disease. The expenditures on the preventative measures against HIV in Poland are decreasing year by year. In 2007, still as much as 3.5 million PLN was engaged in the preventative measures against HIV/AIDS, however in 2013 and 2014 the amount dropped to 2.5 million PLN. Such a significant depletion of funds must have resulted in a drastic reduction of the initiatives aimed at raising the level of public awareness of HIV/AIDS, and other preventative actions. After the abovementioned issues have been taken into account, a research project was launched that was aimed at analyzing the preventative measures taken in our country in the years 2013–2014. The Social Committee for AIDS decided to carry out, in collaboration with the Association of the National Network of People Living with HIV/AIDS “Network Plus”, a national research focused on the analysis of the condition of primary prophylaxis (access to the information, education and services in the area of HIV/AIDS prevention), secondary prophylaxis (access to the information, education and services in the area of HIV/AIDS prevention for persons with an increased level of risky behaviour) and tertiary prophylaxis (measures to improve the quality of the psychosocial sphere of life towards the people infected with HIV and AIDS, their families and the loved ones). The results of the research and the analysis presented in this publication are focused on the current situation, which allows the acquisition and the comparison of multi-dimensional data on the implementation of the National Programme for Preventing HIV Infections and Combating AIDS. The study was undertaken by public institutions (including regional offices, marshals’ offices, provincial sanitary-epidemiological stations), non-governmental organizations implementing preventive measures in the area of HIV/AIDS, people living with HIV/AIDS, and infectious disease physicians who work with people living with HIV/AIDS on every-day basis. Such an orientation of the research resulted from the major aim of the research, which was to diagnose and examine the implementation of the preventative measures taken by public institutions within the National Programme for Preventing HIV Infections and Combating AIDS developed for the period of 2012–2016, and thus, i.e. on this basis, to produce recommendations for the further planning of preventative measures in our country. The work consists of three chapters and has the nature of a theoretical and empirical study. The first chapter contains the issue substantial for the subject matter, i.e. deliberations about the very essence of preventative measures, within which different forms of activities have been distinguished according to the adopted target groups of the preventative interventions. The second chapter is a presentation of the methodology adopted in the framework of the research. The third chapter comprises the research results and the discussion on them. The research project, which constitutes the basis for the prepared publication, was carried out with the support of the Stefan Batory Foundation within the programme entitled Citizens for Democracy, financed with the resources of the Financial Mechanism of the European Economic Area.