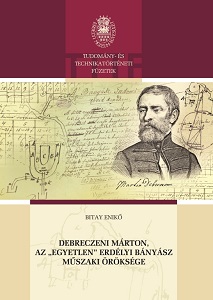 Author(s): Enikő Bitay
Subject(s): History, Cultural history, Bibliography, General Reference Works, Modern Age, 19th Century
ISSN: 2068-3103
Published by: Erdélyi Múzeum-Egyesület
Keywords: technical history; mining; metallurgy science in the 19th century; technical dictionaries
Summary/Abstract: Márton Debreczeni (1802–1851), mine engineer and inventor, was the rejuvenator and the road-opener of Hungarian mining and metallurgy science in the 19th century Transylvania, leading personality of his contemporary Transylvanian intelligentsia. His activity encompassed the reformation on scientific principles of Transylvanian mining, the reorganization of its financial administration, doubled by a rich literary activity.Through his technical creations, Márton Debreczeni revived and reformed on modern principles the Transylvanian mining and metallurgy. He envisaged the importance of scientific progress, and, through experiments and calculus, found technical solutions to make the mining and metallurgical industry of Transylvania more economical. His abilities – the extension of the knowledge he accumulated in various positions, the leadership role he undertook due to his management abilities – had a determinant effect on the development of the technical field in the 19th century. His innovations were also been implemented in other countries, ensuring his international acclaim. Nevertheless, even with all these accomplishments, Márton Debreczeni was to die in the same dire misery he was born.The present volume illustrates the technical legacy this illustrious personality left behind: his inventions, his written contributions and technical dictionaries.The first chapter shows the life of Márton Debreczeni and his studies at Mănăstireni, Cluj and at the Mineralogy Academy in Selmecbánya (Banská Štiavnica). He started his mining apprenticeship in 1825. After a short time, he becomes a Smelting Deputy Foreman at Rodna mine, there after working in almost every mining basin in Transylvania. Meanwhile he marries Teréz Láhner, whose family he met at Selmecbánya. They had a harmonious relationship, raising their eight children. He later worked at Certej, Hunedoara County as Forge Deputy Inspector, then, starting with 1829, they move to Zlatna where he becomes Forge Chief Inspector, Mine Judge and, at age 36, director of all the mines and forges in Zlatna. The last part of the chapter contains a series of testimonials his contemporaries wrote about him, after his death, that were sent afterwards to Imre Mikó.The second chapter presents his engineering accomplishments, his technical innovations and inventions, together with his miscellaneous technical notes. The chapter also features the structure, function and use of the “spiral blower”. In addition, Debreczeni attempted to find a solution to re-use the slag material resulted from the mining/smelting processing.The third chapter attempts to reassemble a broader image on the building of the Hungarian technical language, showing the part Debreczeni played in its inception. The start and the evolution of the Hungarian technical language were influenced by 3 factors: 1. The introduction of technical specialized education and foundation of technical-specific institutions; 2. the founding and dissemination of technical-focused scientific publications in Hungarian; 3. Editing and publication of technical dictionaries. Debreczeni’s name and contributions appear in all these three areas of technical sciences’ development. The chapter presents his contribution in the struggle for starting the professional training for mining and metallurgy in Hungarian, together with his scientific papers and dictionaries, all of which have unfortunately remained in a manuscript form.The fourth chapter defines position and contribution of Márton Debreczeni’s technical legacy in the digital database Erdélyi Digitális Adattár maintained by Transylvanian Museum Society.The book’s Annex contains the description and illustration of Márton Debreczeni technical patrimony.