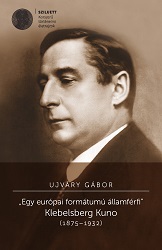 Author(s): Gábor Ujváry
Subject(s): History, Cultural history, History of ideas, Political history, Recent History (1900 till today), Interwar Period (1920 - 1939)
ISSN: 2064-518x
Published by: Virágmandula Kft. - Kronosz Kiadó
Keywords: Ministry of Culture;Hungary Interware Period; Ideology of Hungarian Cultural Supremacy; Hungarian Educational Reforms;Modernisation of Hungarian Universities;Foreign Hungarian Cultural Institutes;Klebelsberg Kuno
Summary/Abstract: Nowadays, beside Governor Miklós Horthy, István Bethlen, Pál Teleki and Gyula Gömbös, probably the name of Kuno Klebelsberg comes up most frequently in the Hungarian media and in public discourse. We are concerning a real renaissance of dealing with him, however superficial they often are. Lately, several institutions have been named after Klebelsberg and he has become an almost cultic figure. Nevertheless, his cult frequently and unnecessary goes too far. In the past decades, many people have investigated his activity, but they have mainly concentrated on minor details. Following 1942, this have been the first book to attempt to summarize Kelbelsberg’s whole career, presenting the partly known and well-founded achievements in the politician’s performance and some of his unimplemented plans. It also designates the new direction of research on Klebelsberg: namely the significance of the lesser-known period of his life preceding his ministry of culture, when he started to build up himself. “I trust that my book, intended to be readable yet written with due scholarly background and citing many of Klebelsberg’s writings and the responses given to them, will contribute to the respect for my hero that he had well deserved. I also think it important that we should value him objectively and consider him not a semi-god but a man and politician. However excellent he was, as a fallible man, he also made mistakes when he sometimes perceived the possibilities before him and his country inaccurately. However, these facts do not detract from his merit but rather strengthen it because we can approach him through them.” Gábor Ujváry