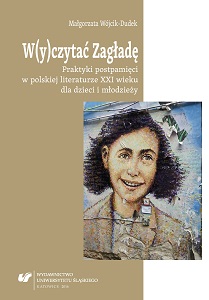 Author(s): Małgorzata Wójcik-Dudek
Subject(s): Language and Literature Studies, Education, Studies of Literature, Polish Literature, History of the Holocaust
Published by: Wydawnictwo Uniwersytetu Śląskiego
Keywords: Holocaust; post-memory; Polish literature; children’s and adolescent literature; literature of 21st century
Summary/Abstract: The book addresses the issue of the Holocaust in the most recent Polish literature for children and adolescents. In order to present the main issues concerning post-memory, the author situates the literature for the young readers in different contexts, starting from historical, through ideological to cultural. Although primarily concerned with the 21st century literature, in Jan Brzechwa’s “Akademia pana Kleksa”, published shortly after the war, the researcher sees a specific founding myth of the narration about the Holocaust. In chapter two, she argues that the author of Pan Kleks’ adventures created a monumental story of the decline of the old world and the attempts at its reconstruction. Drawing from the Kaballah, the author tries to place Brzechwa’s trilogy within the midrashic story about the loss of the Temple and efforts to restore the lost order. The next chapter is devoted to the figure of Janusz Korczak. The author analyses the publications about the pedagogue issued on the occasion of the Korczak Year. It turns out that the hero is revealed through micro-stories, in which he is in his element. These are fragments of biographic stories, Korczak’s own statements, recollections of those in his care and memories of his friends. They require extremely careful reading on the part of a biographer and a reader. The pedagogue’s profile defies classification, and he himself seems to be a tactician continuously changing methods to firstly, serve the children, and secondly, save them from the Nazis. Chapter three concerns the form of story about the Holocaust. While, in chapter two, referring to Pan Kleks’ adventures, the author points out the exhaustion of the traditional genre of fairy tale, in this part of the book she argues that the story of the Holocaust does not fit within the frames of narration so far used in children’s and adolescent literature. Therefore, it can be acknowledged that the new forms of narration about the Holocaust, including a fairy tale, a diary, and a picturebook, provide, on the one hand, a way of coping with the impossibility of describing the Holocaust, and, on the other hand, prove the powerlessness to fully describe it. The next chapters reflect on the Holocaust toposes. The researcher argues that toposes deriving from a non-adjectival literature are present in texts addressed to children and adolescents. The toposes explored particularly intensely include those of a mother, Jewish and non-Jewish child, hunger, the space of a ghetto, wall, the Aryan side, hideaway, play and book. Seeing in these pictures the borrowings from the adult literature, the author makes an attempt at their description. She arrives at the conclusion that the experiences characteristic of children boil down to affective memory, which in turn, becomes a source of recollections. Presenting the collected material, the researcher argues that the kind of practice of post-memory started in the 21st century literature for children and adolescents does not paralyse the young reader, but gives them a chance to experience an encounter with the Other.