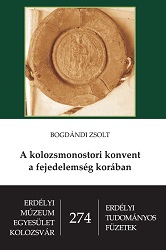 Author(s): Zsolt Bogdándi
Subject(s): History, Local History / Microhistory, Modern Age, 18th Century, 19th Century
ISSN: 2068-309X
Published by: Erdélyi Múzeum-Egyesület
Keywords: Convent of Kolozsmonostor; Transylvanian principality; letter seekers; archives; authentic place
Summary/Abstract: On the territory of the developing Transylvanian principality there were three ecclesiastical institutions which took part in the issuance of authentic charters: the Chapter of Transylvania residing in Gyulafehérvár, the Convent of Kolozsmonostor and the Chapter of Várad. Their medieval history has been already partially studied, but in neither of these cases the research did not cover their activity during the Transylvanian principality. Only in the case of Várad we could refer to the lack of sources because, after the capture of the fortress, the Chapter’s archives perished, but even so someone could attempt, on the basis of the issued charters to reconstruct its activity (we already have such an example for the Convent of Szekszárd). Although truncated, the archives of the other two loca credibilia are reserved in the collections of the National Archives of Hungary, so any other scientific investigations are possible. The research of their early modern activity and the publication of a major part of the protocols remains an urgent and possible task of the historians. The publication of these sources would largely extend our knowledge of Transylvanian law and history of institutions, and they would generate a basic collection of sources for further research.The main aim of this book is to present the characteristics of the charter-issuing activity accomplished by the early-modern Transylvanian loca credibilia by examining the case of the authentication place of the Convent of Kolozsmonostor, where the majority of the protocols have been preserved. We attempt to answer the following questions: whether the reorganized and secularized Convent, which has preserved its designation and has been moved together with the archives to Kolozsvár, has met the expectations of the society in terms of preservation of the documents and issuing of charters? How did it work and what was its role in the Transylvanian society?After the establishment of the Transylvanian state, the loca credibilia that entered under its jurisdiction, underwent a peculiar transformation. On the same grounds as similar institutions from Hungary, a specific Transylvanian institution, the office of the requisitors came to life to satisfy the needs of the society for authentic charters and to ensure the conservation of the archives. After twenty years of uncertainty, during which the secularized institution issued copies from the Convent’s archives under the seal of the city, the time for reorganization has arrived. The appointed requisitors had the right to complete all the activities made earlier by the places of authentication, but because there number was small, other institutions (envoys of the voivodes, counties) have gradually taken their place in the external authentication activity. In this process, the articles of Approbatae presumably constituted a turning point. From the second half of the 1650s, the external authentication activity (inspection of boundaries, seisin of estates to new owners, inquiry, etc.) was likely to disappear.At the same time, the disasters that occurred in 1658, and the subsequent long term instability, caused such a break in the activity of the Convent that we could consider it as the end of the institution’s early-modern history. Thereafter the charter-issuing activity was more and more casual, the place of authentication became mere depository of charters and produced copies of the documents in his custody.One could say that it was the moment which marked the end of the institution’s history of and the beginning of the archive’s history. In the age of principality the archives of the Convent together with the sacristia of the Chapter from Gyulafehérvár and probable Várad as a result of the measures taken by the princes and the Orders have played the role of the state’s “National Archives”. Finally, in order to reflect on the activity of the Convent from Kolozsmonostor during the age of principality, we should compare László Papp’s point of view, based on the previous literature and law-articles, and the impedimentums listed in 1655 by one of the requisitors, István Pálfi with the “products” of the Convent’s activity: the registers (protocolla) and the charters. Both the quantity and the quality of the preserved archive materials prove that the reorganized Convent remained for a long time one of the major charter-issuing institutions of Transylvania.