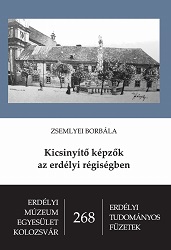 Author(s): Borbála Zsemlyei
Subject(s): Theoretical Linguistics, Historical Linguistics, Finno-Ugrian studies
ISSN: 2068-309X
Published by: Erdélyi Múzeum-Egyesület
Keywords: diminutive suffixes
Summary/Abstract: The analysis of diminutive suffixes and the diminutive derivatives has been marginalized in the linguistic descriptions.Diminutive suffixes form a special group of denominal nominalizing suffixes. Their primary role is not the creation of new words but the expressions of semantic nuances, and that is why they cannot be considered typical suffixes. Their formation, their apparition is rooted in the attitudes of the speakers, in the linguistic ambition to avoid plainness in phrasing. The most important characteristic of diminution lies in its playfulness.As a result of this, diminutive suffixes have significantly spread in the different languages, nevertheless their frequency, productivity, their systemic nature differs in all these languages. In English, for example, there are relatively few diminutive suffixes in comparison with other European languages (Spanish, Italian, Russian), while in the Swedish language except for some lexicalized derivatives there are no diminutives at all. On the other hand there are differences in complexity of the systems between the different languages. In the Hungarian and German languages there are only a few formants available to the speakers (‑cska/‑cske, -ka/-ke; -lein, -chen), while in Russian diminutives form a complex system, and speakers can choose the most appropriate one according to their semantic and pragmatic features (Bronislava 1987, Dahl 2006: 594).The category of diminutive suffixes shows a certain kind of consistency throughout the history of the language: although during the periods of the history of the language some new elements appeared to express diminution, their group thus being enlarged, their meaning basically stayed the same, the modifications add nuances only. Another particular characteristic of this group of suffixes is that the ancient formants have not disappeared, they still exist in a few derivatives and in some dialects. The function of -csa/-cse from the second half of the Old Hungarian period was limited to the creation of pet names (e.g. Ancsa, Borcsa, Julcsa), in the Slavonian dialect this was the most frequent diminutive at the beginning of the 20thcentury (e.g. aprócsa, egércse, küszöbcse), moreover it was not rare in adverbs, either (e.g. nagyszerűcsén) (Zsilinszky 2003: 181).The subject of this research was the analysis of the 16–19th century diminutives in the Transylvanian Hungarian Historical Dictionary (THHD), as well as that of the diminutive derivatives (which may be lexicalized). I chose this particular subject because as an editor of the THHD I realized that this dictionary provides extremely rich linguistic data. The analysis of the determined period and region based on the marked data constitutes an organic part of other researches in language history, completing them, as such an extensive analysis has not been carried out on this group of the denominal nominalizing suffixes.The analysis of diminutive suffixes represents a small fraction of the linguistic research, in connection of which – mainly based on the bibliography – one cannot say much. Nevertheless during the more thorough analysis it became obvious that applying several aspects we can get a detailed picture of the use of diminutives in the Old Hungarian language in Transylvania. The results of the analysis refer to the Transylvanian regional standard of the period stated above (from the point of view of language history the Middle and New Hungarian period), because as the title of the THHD suggests, it contains the linguistic data of the Eastern Hungarian speech area.Due to the specific nature of the subject it was a requirement to perform a thorough analysis from as many perspectives as possible. As a result of which I enlarged the traditional description of diminutives – which is based on morphological aspects –, and I took into consideration their sociolinguistic determination, pragmatic character, geographic distribution.The research was not extended to the present day diminutives (from the Transylvanian or Hungarian dialects), nor to other denominal nominalizing suffixes.The aim of this work is the presentation of the diminutive suffixes used in the Old Hungarian language in Transylvania (16–19th century), as well as the description of their connection rules, morphological, syntactic, morphopragmatical, semantic features, their sociolinguistic determination and geographic distribution.