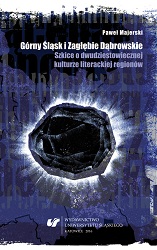 Author(s): Paweł Majerski
Subject(s): Language and Literature Studies, Studies of Literature, Polish Literature, Theory of Literature
Published by: Wydawnictwo Uniwersytetu Śląskiego
Keywords: Upper Silesia; Dąbrowa Basin; literary culture
Summary/Abstract: The monograph is comprised of four interrelated parts devoted to the literary culture of Upper Silesia and the Dąbrowa Basin, including poets, prose writers and publishing industry. In the first part, the author touches upon the oeuvre of Lech Piwowar, Stanisław Wygodzki and Wacław Stacherski. Both in these as well as the following essays, the author focuses first and foremost on the poetics of the poems and the question of how much the extent to which the writers in question resided in the region (their biographies testify to their roots in small communities or “temporary” residence) influences the manifestations of local patriotism as well as the manifestations of the need to step outside of the local framework. Thus, both specific and general overviews go beyond the strictly regional context. The second part, also devoted to poetry, lacks the “historical” dimension of pre-war and wartime presence of the writers. Stanisław Krawczyk, who existed and created on the border between Upper Silesia and the Dąbrowa Basin, Grzegorz Słobodnik, who was the co-founder of Reduta 56, as well as other poets of the “younger generations” (e.g. Bartłomiej Majzel, Paweł Lekszycki, Wojciech Brzoska) at the same time emphasized their place in the region and attempted to gain popularity beyond Upper Silesia and the Dąbrowa Basin. The third part of the monograph can be described as a Sosnowiec reconnaissance. Jan Pierzchała, the author of “Legenda Zagłębia” (“The Legend of the Dąbrowa Basin”) for years engaged with the general collective memory of local places. Edward Kudelski, writing his novel „Sosnowiec jest takim miastem jak Londyn, Paryż, Wiedeń…” (“Sosnowiec is a City Just Like London, Paris, Vienna…”), attempted to sketch out the local topography and painted the fates of the inhabitants of the Dąbrowa Basin. Moreover, in this part, the author recalls the figure of Włodzimerz Wójcik, the author of “Spotkania Zagłebiowskie” (“Meetings in the Dąbrowa Basin”) and “Zagłębiowskie impresje” (“Impressions of the Dąbrowa Basin”), which documented his life-long attachment to the place of his birth. Part four constitutes a “dynamic” overview from the perspective of sociology of literature. This part of the monographs includes also a summary essay, which contains information concerning two departments at the University of Silesia in Katowice which conduct research into the literary life of Upper Silesia and the Dąbrowa Basin. This conclusion, however, constitutes at the same time an introduction of sorts – an invitation to a debate concerning the prospects of regional studies, strategy of research, and institutional systematization of research plans.