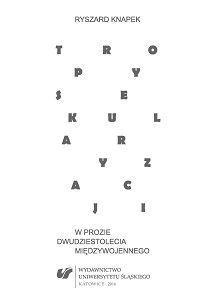 Author(s): Ryszard Knapek
Subject(s): Language and Literature Studies, Studies of Literature, Theology and Religion, Polish Literature, Theory of Literature
Published by: Wydawnictwo Uniwersytetu Śląskiego
Keywords: interwar period; prose; novel; secularization; religion; modernity
Summary/Abstract: The main aim of this work is to examine the usefulness of the notion of secularization (understood both as a theory and ideology) for the reading of the Polish prose from the interwar period. Secularization is one of the fundamental categories of modernity, still an important issue in the study of literaturę, and yet, it has not been broadly applied in native literary studies so far. The context for the following discussion is the post-secular thought in its various aspects. This work consists of three chapters which constitute a whole, but can also be read as separate dissertations. Chapter one is fundamentally theoretical, with theory being immediately backed up (as a starting point and as examples) by interpretations of literary texts. Its aim is the reconstruction of the “secular theory of the novel”. Researchers such as Northrop Frye and Ian Watt demonstrate how secularization processes influenced the rise and development of the genre. In “The Rise of the Novel”, Watt puts forward a thesis that an essential determinant of the novel, a genre that originated in the 18th century, is locating justifications for the world portrayed as well as for the characters’ psychology solely in the “earthly” matters, regardless of the author’s personal convictions. An original conception is proposed by James Wood who argues that the novel transforms the modern conception of faith introducing the notion of fiction, which blasts out the religious tradition of strong faith from the inside. Chapter two is entirely devoted to a few novels classified as novels of formation (“Bildungsroman”) and set in Galicia at the turn of the 19th and 20th centuries, the plot of which is centered around school. The basis for analysis are the categories and phenomena (reading, school as an institution and studying) which allow us to follow through the changes of consciousness being the main theme of the analyzed novels. The research method in this chapter is a deepened interpretation of excerpts of the novels and the intertextual reading of literaturę through literaturę. From the analyses conducted in this way emerges a surprisingly cohesive, although diverse in details, story of the changes of adolescent consciousness against the background of the conservative community. Chapter three is a collection of various interpretations of texts, each of which is based on different categories, conceptions or languages. Together, they show a multifaceted picture of how the prose of the interwar period reflects, comments on and inspires the religious transformations of the contemporary man and society. The focus of interpretation are the four texts: Witold Gombrowicz’s “Ferdydurke”, Aleksander Wat’s “Bezrobotny Lucyfer”, Stanisław Ignacy Witkiewicz’s “Pożegnanie jesieni” and Jarosław Iwaszkiewicz’s “Pasje błędomirskie”.