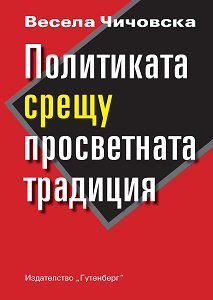 Author(s): Vesela Chichovska
Subject(s): Politics / Political Sciences, History, Social Sciences, Education, Governance, Modern Age, Recent History (1900 till today), Government/Political systems, Preschool education, School education, History of Education, State/Government and Education, 19th Century, WW II and following years (1940 - 1949), Post-War period (1950 - 1989), History of Communism, Post-Communist Transformation
Published by: Издателска къща "Гутенберг"
Keywords: Bulgarian history; History of education; Socialism;
Summary/Abstract: This book is about the regime after 9th of September 1944 (The Socialist Revolution of 9th of September) and the unopposed choices taken in the sphere of education by the government of Kimon Georgiev, unopposed because there had been no political opposition left in the government. Then, during the 6th Grand National Assembly a great number of time-tested and aprooved educational institutions were closed legally, as it looked like, and ideological principles (Politics) were brought in the educational system of Bulgaria. For the creation of this monograph, the author Vesela Chichovska had reviewed the collections of Central State Archives of Bulgaria, the archive of several Ministries, the archives of Bulgarian Academy of Science, the diaries of the 26th Ordinary National Assembly and of the 6th Grand National Assembly, forming solid, but almost unused, except from her documentary material.