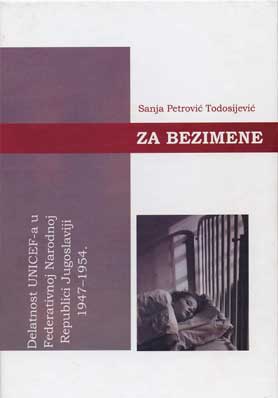 Za bezimene
For the Nameless

Author(s): Sanja Petrović Todosijević
Subject(s): History, Political history, Social history, Recent History (1900 till today), WW II and following years (1940 - 1949), Post-War period (1950 - 1989), Cold-War History
Published by: Institut za noviju istoriju Srbije
Keywords: UNICEF; Second World War; Cold War; Yugoslavia; FPRY; Federal People's Republic of Yugoslavia;
Summary/Abstract: The United Nations International Children’s Emergency Fund (UNICEF) was founded on 11 December 1946 in New York City by the United Nations General Assembly Resolution 57 as a temporary institution and an integral part of the UN system with the aim of providing relief to children of European countries devastated in the Second World War. The Agreement between the International Children’s Fund and the Government of the Federal People’s Republic of Yugoslavia was signed on 20 November 1947. The policy of the state toward the Fund in the period following the end of World War II reflects the international position of the socialist Yugoslavia, which was considered, until the summer of 1948, a territory under pronounced Soviet sphere of influence. In keeping with the policy of Western powers and the United States, after the conflict with the “big” Soviet leader it acquired a status of a country which should at least be “kept afloat”. Fencing itself first from the West and then from the East, Yugoslavia found itself in disadvantaged position of a country with insufficiently defined position in the world divided by Cold War. Change of attitude toward the USSR and other Soviet bloc countries has only temporarily immobilized Yugoslav officials. Economic blockade from the East has undoubtedly made Yugoslav leadership seek partners on the other side. In the light of new developments, any kind of aid, like the one distributed through UNICEF, coming in one way or another from the West and from Americans, was regarded with greater approval. Redefinition of Yugoslav relations toward UNICEF was finally completed in January 1949. Since the beginning of 1949 the International Children’s Fund became an unquestionable partner of the new Yugoslav authorities in dealing with sanitary and hygienic backwardness, more precisely in their effort to solve some of the major social problems. By the summer of 1950 Yugoslavia became a privileged beneficiary of UNICEF programs. As the only Eastern bloc country which managed to oppose Soviet influence and tried to build what was often referred to as its own road to socialism, Yugoslavia became strategically an extremely important partner to Western democracies. Any form of assistance was a proof of affinity and confirmation of the right choice in the years when the mankind had to deal with numerous crises as the consequence of Cold-War divisions in the world. The analysis of the implementation of UNICEF programs through presentation of the relationship between the Fund and the new, communist authorities in the years when Yugoslavia was seeking “its own road to socialism”, social and political environment in which foreign officials of UNICEF mission on temporary assignment in Yugoslavia had to work, short-term programs intended to contribute to the satisfaction of elementary needs in food, footwear and clothing, long-term campaigns aiming to encourage different insufficiently developed spheres of social environment, massive medical campaigns implemented to eradicate dangerous infections should have pointed to major social problems that represented a framework in which Yugoslav boys and girls grew up in the first ten years following the end of the Second World War. Implementation of mass-scale UNICEF campaigns has helped in identifying hundreds of thousands of anonymous youngsters, marginalized human lives whose discovery represented an extraordinary challenge for the state in which real needs exceeded available capacities.