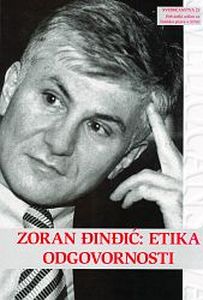 Author(s): Authors Various
Contributor(s): Latinka Perović (Editor)
Subject(s): Ethics / Practical Philosophy, Civil Society, Governance
Published by: Helsinški odbor za ljudska prava u Srbiji
Summary/Abstract: The attempt to interpret the phenomenon of Zoran Djindjic in Serbian politics at a historical juncture has not ended yet. This particularly refers to clarification of the murder of Serbia's first post-communist Premier.As long as the Serbian society - its intellectual elite in the first place - are not ready to ask themselves why with Zoran Djindjic gone they have returned to the same spot they had been in before him, they would be unable to untie the knot his murder had tangled by erasing the line between politics and crime," says Dr. Latinka Perovic in her introductory study to the collection of papers of over 15 authors. At the books launch, on June 2, 2006, in the Belgrade Media Center, Chairperson of the Helsinki Committee Sonja Biserko said among other things: "Today - three years after Zoran Djindjic's assassination and six years after Slobodan Milosevic's ouster - Serbia is still incapable of self-definition and unable to confront the future. In other words, Serbia cannot come to grips with her recent past. Seen from today's angle, Zoran Djindjic's emergence in Serbian politics and his tragic end are a metaphor for Serbia herself. Or, as Latinka Perovic put it, his personal and political fate sublimates Serbia's drama. "Those who have either doubted or denied Zoran Djindjic as a man of vision at the beginning of 20th century cannot but say now that he has been in the right. With him gone, Serbia suffered a historical setback - particularly when it came to her ability to learn the lesson from a failed decade, the warring policy and the crimes that had made a part of her warring strategy. "With this book the Helsinki Committee pays the tribute to Zoran Djindjic both for his personal courage and statemanly resoluteness to fight regressive forces.Zoran Djindjic was among those few figures in the Serbian history, whose vision moved them towards Europe. Confronted with the ethnic model of the state, this fragile trend has always been marginalized, while its advocates discredited and often physically threatened. Zoran Djindjic was such a figure. It is clear today that the masterminds behind his murder have tried to curb this trend. "At the same time, this collection of papers testifies of Zoran Djindjic's theoretical opus and his creative energy. This book is a document of an era and its major actor we wish not to be forgotten. And even more than that - we wish not to allow manipulation with either of the two. "This book primarily addresses young people, generations to come. Unfortunately, they are doomed to bear the biggest burden of the recent past. To them, Zoran Djindjic can be a compass of maturing and overcoming the past. "Before I give the floor to our panelists, I wish to thank all authors in this major project. I particularly thank Latinka Perovic, who has managed to bring together so many competent people and, from a relatively short historical distance, present an epoch of Serbia's history through Zoran Djindjic's person and writings. "My special thanks go to Jadranka Jelincic, director of the Fund for an Open Society, who recognized the significance of this endeavor and made it possible to bring this collection of papers before the public eye."