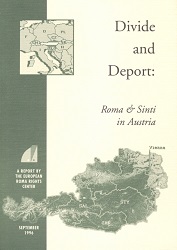 Roma and Sinti in Austria

Author(s): Claude Cahn
Contributor(s): Dimitrina Petrova (Editor)
Subject(s): Politics / Political Sciences, Social Sciences, Cultural Essay, Political Essay, Societal Essay
Published by: European Roma Rights Center
Keywords: Austrian Sinti; Austrian Roma;
Summary/Abstract: Between 20,000 and 30,000 Roma and Sinti live in Austria today. Some are descended from Roma and Sinti who have lived for generations in Austria, especially in the Burgenland district. Others are migrants or the children or grandchildren of migrants who came to Austria to work and live, attracted by its favorable post-World War II economic climate. Still others are persons receiving or seeking asylum as a result of poverty and ethnic pogroms in contemporary Central and Eastern Europe. This report will deal with this exceedingly diverse group of people as if it were a single social phenomenon. Individual members of the Romani community might not agree with this unified treatment. However, the group as a whole has been forced in recent years to respond to a rise in right wing, racist, xenophobic, or specifically anti-Romani sentiments, actions and legislation targeting Roma as Roma, regardless of internal distinctions. Since at the end of the day all Roma must adjust in some way to the new hostile climate in Austria, this report treats the various abuses of their rights as similar, and their fate as common. The research for this report was carried out over the period of February—May, 1996, in accordance with contemporary methodology in human rights investigation. Victims and witnesses were interviewed, wherever possible, in private. All statements were subject to sceptical scrutiny, and again wherever possible, corroboration was sought from second and third parties. Comment was also sought from competent authorities, although these were, in Austria, singularly unhelpful and, with several notable exceptions, the Austrian police and Interior Ministry did not respond to queries made by the "European Eoma "Eights Center. The purpose of the report will be to show the disastrous consequences on Roma of a series of new laws on legal residence and asylum, ratified between 1991 and 1993. The report will also investigate how the ground was prepared for the systematic exclusion of Roma in Austria through the recognition of a narrow and unrepresentative group of Roma as an Austrian “ethnic group” Volksgruppe). A connection will be made between this systematic exclusion and the recent appearance in Austria of episodes of public violence specifically targeting Roma. Finally, the report will make a series of concrete recommendations to the Austrian government for improving the legal situation of Roma in Austria.