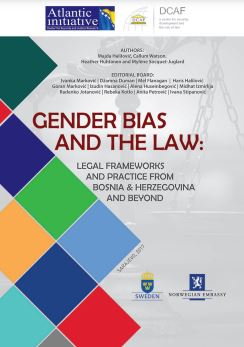 Author(s): Majda Halilović, Callum Watson, Heather Huhtanen, Mylène Socquet-Juglard
Contributor(s): Ivanka Marković (Editor), Mel Flanagan (Editor), Džamna Duman Vranić (Editor), Haris Halilović (Editor), Goran Marković (Editor)
Subject(s): Gender Studies, Constitutional Law, Criminal Law, Civil Law, Human Rights and Humanitarian Law, Social differentiation, Studies in violence and power
Published by: Atlantska inicijativa: Udruženje za promicanje euroatlantskih integracija BiH
Keywords: gender; gender bias; BiH; sexual harassment; divorce; rape; domestic violence;
Summary/Abstract: Although often unnoticed or ignored, gender bias is prevalent in all legal systems across the world, and Bosnia and Herzegovina (BiH) is no exception. The consequences of gender-based bias and discrimination affect everyone, from legal professionals to women and men who seek to assert their rights through the justice system. Gender bias can affect the atmosphere in courtrooms, the presentation of cases, the decisions of judges, and even whether cases come to court. By reducing and eventually eliminating these prejudices, the justice system has the potential to become more effective, democratic, and fair. The Atlantic Initiative (AI) and the Geneva Centre for the Democratic Control of Armed Forces (DCAF) have been working with judges and prosecutors from across BiH to address the topic of gender bias since 2011, within the context of the Gender and Justice Reform Project. During project activities, judges and prosecutors have highlighted the importance of ensuring that the skills they have learned in identifying and overcoming manifestations of gender bias are also passed on to the next generation of legal professionals. In response to this need, and with a view to engaging law scholars on the topic, in order to further our understanding of how gender bias presents itself in specific local contexts, DCAF and AI sought to facilitate the development of a handbook on gender bias specifically directed at law students in BiH. Between February and September 2016, 11 university law professors from across BiH met regularly in a series of workshops to develop the different thematic units, meant to address the impact of gender bias in legal practice. Each of these workshops focused on identifying gender bias in a specific field of law by reviewing existing legal frameworks as well as relevant domestic, regional, and international research. Written content, exercises, and discussion topics were then drafted with the aim of helping law students appreciate how gender bias is present in both the law and the application of law, and how these prejudices can adversely affect the administration of justice. The work of these consultant professors, with the facilitation and organization of AI and DCAF, has resulted in this Handbook. While the thematic units they developed could theoretically be delivered as a standalone course, they have been primarily designed to complement existing courses on different aspects of criminal, civil, and family law in order to mainstream gender across the curriculum. However, it is important to stress that the first two thematic units provide a basic introduction to the concepts of gender and gender bias and are therefore recommended as a pre-requisite for all other units in the series. The remaining units may stand on their own, providing enough content for one or two 45-minute sessions. Alternatively, some professors may prefer to integrate individual exercises or components into their existing units. Students pursuing master’s and doctoral degrees may find that these units provide an overview of how gender bias affects their specific field of law, and may direct them toward further reading if they wish to explore a given topic in more detail. The units are based around applicable domestic, regional, and international legal frameworks and draw upon legal theory, practical examples, and research in the sociology of law from both BiH and abroad. Each unit is reinforced by relevant literature, included in an annex (much of which had not previously been translated), which students can reference to enrich and expand the scope of their knowledge. Furthermore, each unit is designed to support modern, interactive teaching practices and contain video links, discussion topics, practical exercises, and case studies. The purpose of the Handbook is to provide law students with a greater awareness of the existence of gender bias in court proceedings and to expand their understanding of how gender bias is manifested in the application of law within the social context of BiH. Students can use the Handbook in its entirety, or in parts, in a variety of ways: to prepare for lectures, to study for exams, or to expand their knowledge of law. Ultimately, the goal is that future legal professionals will be better equipped to identify and overcome explicit and implicit bias in their work. In addition, as interest in this topic grows within the academic sphere, it is important that scholars are able to support legal practitioners by also furthering their understanding of how gender bias manifests in the specific context of BiH.