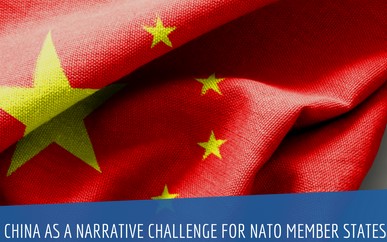 Author(s): Filip Šebok, Richard Turcsányi
Subject(s): Media studies, Diplomatic history, Political history, Economic policy, Government/Political systems, International relations/trade, Political behavior, Politics and communication, EU-Accession / EU-DEvelopment, ICT Information and Communications Technologies
Published by: NATO Strategic Communications Centre of Excellence
Keywords: China; NATO; Foreign policy; geopolitics; COVID-19; Chinese strategic narratives in Europe; EU; Chinese state media; Social media and politics;
Summary/Abstract: China is generally considered one of the greatest challenges facing NATO member states in the 21st century. Much attention has been paid to China’s decades-long meteoric economic rise which has also fueled a massive military buildup. During the 2010s, China became increasingly assertive in its geopolitical neighborhood, raising alarms in numerous capitals. In recent years, China’s growing interference in domestic affairs of countries around the world has attracted growing international attention, while Chinese technology is quickly catching up – or even leading – in key domains, such as 5G, AI, big data, surveillance, space, and others. In this paper, we delve into the area of strategic narratives, which thus far has not been at the centre of discussions about the challenges posed by China. We argue, however, that it should be placed there. As China increasingly tries to “tell its story well” to the world and seeks to amplify its discursive power, it is critical to examine what China’s story is, who is it aimed at, and how China’s narratives potentially affect its status and behaviour in the international system. Strategic narratives and visions can represent key dimensions of great power competition. Following Michel Foucault, discourse will be seen in this paper as power, and international society as an arena for discourse-power struggle. According to Miskimmon et. al., “strategic narratives can be defined as a means for political actors to construct a shared meaning of the past, present and future of international politics to shape the behavior of domestic and international actors”.