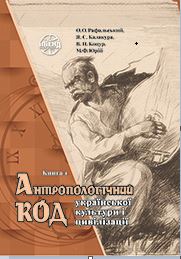 Author(s): Not Specified Author
Subject(s): Anthropology, Cultural history, Ethnohistory, Local History / Microhistory, Social history, Cultural Anthropology / Ethnology, 17th Century, 18th Century, History of Religion
Published by: Інститут політичних і етнонаціональних досліджень ім. І. Ф. Кураса НАН України
Summary/Abstract: The historical, theoretical and methodological principles of scientific knowledge of the anthropological code of Ukrainian culture and civilization, their originality and mystery, at the epicentre of which is Human as a unique and highest value, are clarified. Its essence is revealed as a set of images, means of biological and sociocultural nature, associated with a set of stereotypes of consciousness of an individual or group of people, which are expressed in archetypes, mentality, intellectual, moral and material life, political and social organization of society, its culture and civilization, the transit nature and ability to be inherited. The content and functions of the anthropological code of culture and civilization at different stages of Ukrainian history - from ancient times to the present, as a system of values and types of human thinking, psychology and mentality, ways of perceiving values, intellectual and emotional understanding of the world, culture and civilization are analysed. The core of the anthropological code of culture is Human, and the anthropological code of civilization is Society. // Various theories of the loss of the value-semantic form of human existence in the context of globalization in the modern world, the paradigm of the "Russian world", the code of the so-called "all-Russian" culture, canonical territory, civilization, common roots, genetic and cultural development of Ukrainian and Russian peoples are refuted. The publication is intended for scholars and lectures of history, philosophy, cultural studies, political science, ethnology, teachers, graduate students and students, a wide range of people interested in anthropological understanding of Ukrainian culture and civilization.