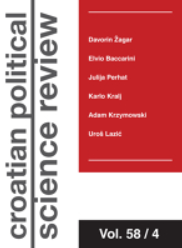 Summary/Abstract: In the first part of the paper the author presents the key theses of Vickie Sullivan’s reading of Machiavelli. Sullivan argues that, in order to prevent corruption, Machiavelli innovatively reworks elements of Christian teaching for entirely temporal purposes and offers a specific, modern solution, ‘new Rome’, in the form of an irreligious, fearful republic which early and effectively punishes the ambitious few seeking to establish tyranny. In the internal realm of the city, the Florentine reduces class desires of the plebs and the greats under the common goal of acquisition. A bellicose, tumultuous republic satisfies the desires of all the social actors, resulting in a lasting political order. In the second part the author critically engages with Sullivan’s interpretation, drawing on Claude Lefort’s interpretation of Machiavelli. Surprisingly, Lefort’s groundbreaking work on Machiavelli has been absent in Straussian readings of the Florentine. By highlighting the authentically democratic nature of Machiavelli’s project, in contrast with Sullivan’s reading, an entirely different ‘new Rome’ arises on the horizon.