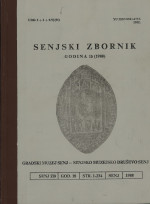 Summary/Abstract: On the basis of archival notes of the Archives of Zadar, relative to the City of Rab, the autor names six priests were appointed notaries public from A.D. 1503-1506. Among them we find the names of Ambroz (Broz) Kacitić from Dubovik (Bužani - Lika), as copiers of the glagolithic Codex of the years 1486., known under the name of »Kolunićev Zbornik«, which is kept in the Archive JAZU in Zagreb. We know that Ambroz (Broz) Kacitić from Dubovik, form the Kolunić stirps, after the foremen-tioned job, became a priest and, in 1505, became, also, a notary public.