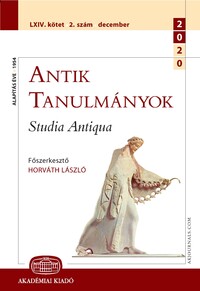 Summary/Abstract: The current study has two objectives. On the one hand, it provides an in-depth analysis of the argumentation of the oration Against Timocrates. On the other hand, the analysis focuses on the issues of textual criticism that arose in the 19th century and have been debated ever since. Approaching the problems from a new perspective – augmenting the convincing arguments put forward by E. M. Harris with the analysis of the argumentation – the study argues that the two halves of the speech are in fact parts of a well-planned, and precisely edited whole, and the integrity of the text need not be questioned.