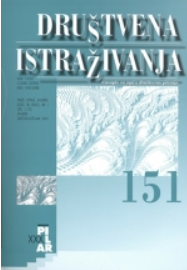 Summary/Abstract: Minority threat theory and existing research show that public attitudes towards certain types of offenders (e.g. ethnic and racial minorities) are often more punitive. Research also reveals that a significant proportion of the public associates the increase of immigration with higher crime rates. Negative attitudes, as well as an overall anti-immigration sentiment, have been increasing internationally. Therefore, we hypothesise that the public will have more negative and punitive attitudes towards immigrant offenders than towards citizens. Using a sample of students from the University of Zagreb, this research tested the above-mentioned hypothesis and explored whether factors like immigration status, ethnic identity, type of offense, and the age of the hypothetical offender impact student attitude on immigrant crime. To test this proposition, we used online surveys with factorial vignettes. The results show that participants ask for harsher sentences for undocumented immigrants, but immigrant status and the national origin of the immigrant are not associated with the perception of recidivism, dangerousness, or criminal typicality of offender.