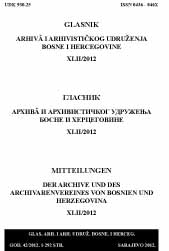 Radničko i namješteničko zakonodavstvo u Bosni i Hercegovini (1918.–1929.)
The workers and state employees legislation in Bosnia and Herzegovina (1918 - 1929)

Summary/Abstract: Adoption of the regulation of insurance and protection of workers, as well as their implementation by the state is mostly seemed to be in front of other countries to meet its obligations and its labor legislation for propaganda purpose, to align with conventions adopted on the International Labour Conference. Regulation of insurance for workers carried out the unification of security throughout the country and regulate the protection of life and health of workers. However, labor legislation was permeated with numerous disadvantages. The biggest drawback of the workers’ insurance was the omission of agricultural workers from compulsory insurance, which is the majority of the population in the state remained without insurance. Not all workers who have been put under compulsory insurance were not uniquely insured. Insurance in case of illness and accidents was introduced immediately after the entry into force of the Act, but the application and the introduction of other types of insurance delayed and postponed. So the insurance people with special needs, and insurance in case of exhaustion, old age and death remained a dead letter. The Law on the Protection of workers decided maximum working hours, minimum daily and weekly rest, the prohibition of night work for women and children and the prohibition of employing minors. Also, the law has determined the most necessary hygienic measures for workshops and established the right of workers and employees to freedom of association to rectify its economic position. Although the workers’ wages did one of the pillars in the protection of workers, this issue of positive legislation in the period since 1918. to 1929. was not regulated. In order to monitor the implementation of laws and regulations on the protection of workers’ special laws were established labor inspection. However, the Law on the protection of workers, the Insurance Act and the Labor Inspectorate were not applied in full measure. Their application in practice was incomplete, and no legislation in the country were not so violated and they played the role as the provisions of these laws. Immediately upon the entry into force of labor legislation were followed by sharp reactions employers, who argued that such legislation will ruin the young domestic industry and economy. Especially hard for them introduce eight-hour working time and conditions prescribed by the Act for its continuation. However, no legislation is not blocked them that almost all companies, and even government grossly violate workers’ rights that the tentacles of the time. This allowed them to tell the truth, the state allowed, passing numerous laws, which facilitated the process of extension of time. Particularly sharp reaction employers were against labor commissioners and their involvement in the management of the enterprise.