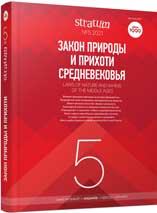 Summary/Abstract: The article presents the results of the investigation of diet features of the Kyiv Podil population in the first half of the 11th century, based on archaeozoological analysis. The study of meat and fish diet in a separate chronological layer includes the animal bones from the well-stratified cultural horizon 14 at the Spaskyi excavation site, dated back to 1020—1040s years. Archaeological finds from this horizon reflect both the northern and southern vectors of cultural connections.The inhabitants of discovered here estates ate quite varied and actively consumed meat. Among other food, they preferred beef and pork, buying most of the meat in the market, and the cows were kept for milk in the household. Small ruminants principally raised for their milk, meat, and wool were eaten less often. Chickens were also rarely eaten; they were bought, and not bred at home. Finds of eggs from the horizon 14 used for food were not chicken eggs, but goose eggs. Occasionally the diet was enriched with horses, wild-hunted animals, and large fish, incl. Acipenseridae. Dogs were a rare and unusual part of the diet.