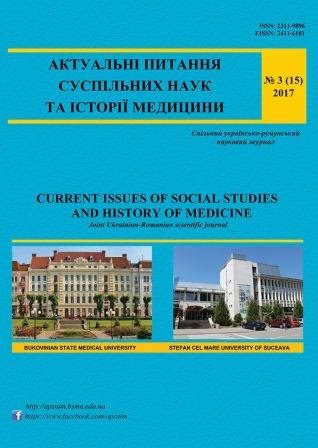 Summary/Abstract: The aim of the study. The article presents materials for the study of the intellectual heritage of the doctor-thinker Pirogov, formed during the last twenty-five years of his life in Ukraine. The authors focus on the philosophical, conceptual and generalizing nature of scientific works of Pirogov. It is noted that in the intellectual heritage of the outstanding doctor-thinker during the fourth century of the Ukrainian period of life the unique own scientific-practical and organizational-administrative experience gained by M.I. Pirogov in the process of brilliant clinical activities both in peacetime and during the provision of medical care to the wounded in the military conflicts of the second half of the XIX century. Research methods: The system-historical method was used to study in chronological order the intellectual heritage of the doctor-thinker Pirogov, formed during the last twenty-five years of his life in Ukraine. The biographical method was used to study life events on the basis of eyewitness reports and testimonies. Scientific novelty. The authors pay special attention to the works of Pirogov, which were written in the 1870s as a result of his stay in the theaters of war of the Franco-Prussian and Russian-Turkish wars. Comprehensive professional competence, great authority, colossal practical experience of a military field surgeon allowed Pirogov to go far beyond the inspection functions assigned to him and become in fact the main consultant on the organization of medical support of troops. In works written by Pirogov in his estate in the Ukrainian Podillya, he not only summarizes his own views on the organization of medical care and military field surgery, but also expresses his views on field hygiene, military field therapy and epidemiology. In particular, it is noted that the philosophical views of MI are especially relevant today. Pirogov on the common features of wars and related wars, epidemics. Competence Pirogov on the organization of medical care and control of infectious diseases are confirmed by his works, written in 1869 and 1872 at the request of the Poltava Provincial Zemstvo. In particular, there are views on the organization of health care and the collection of statistics that will allow for the necessary preventive measures, as well as sharp criticism of local government agencies for the illusory ideas about the effectiveness of the fight against infectious diseases. In preparing the article, the authors used materials from the lifetime editions of works by Pirogov, deprived of censorship of that time, as well as publications about the outstanding thinker of authoritative authors (M. Burdenko, F. Walker, A. Georgievsky), which have been studied to this day insufficiently and quite fragmentarily. Conclusions. Analysis and publication of the main provisions of little-known and little-studied professional publications MI Pirogov, written by him during the years 1860-1870 testify to the extremely active educational, organizational, clinical and scientific activities of Pirogov in Ukraine. During the fourth century, the outstanding physician-thinker wrote and published his most powerful scientific works, which convincingly testify to the significant contribution and assistance of Pirogov progress of Ukrainian education in medicine and science.