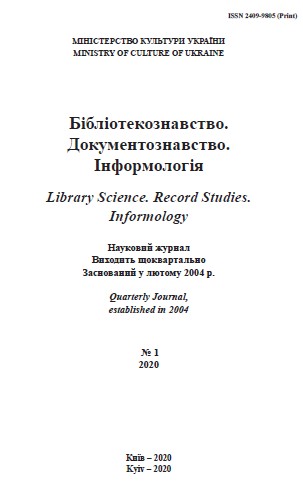 Summary/Abstract: The purpose of the article is to make bibliometrical analysis of publications and to characterize the main periods of scientific, scientific-pedagogical, and public activity of Doctor of Historical Sciences, Professor Serhii Lytvyn. The methodology consists in the use of general scientific methods: analysis, synthesis, logical method, method of visualization of research results. Methods of selection, bibliographic characteristics, grouping, and systematic analysis of scientific publications are used. Scientific novelty. The total number of Serhii Lytvyn’s publications and works for 1989–2019, including articles, abstracts, other types of publications (monographs, textbooks, manuals, methodical materials, etc.), journalistic works (articles, interviews, resolutions, statements, appeals, prefaces, etc.) are determined. The distribution of the scientist’s publications for the specified period is divided into four types: articles, theses, other publications and journalistic works. Bibliometrical analysis was performed on the basis of 328 published works by Serhii Lytvyn. The main peaks of the scientist’s publishing activity by years both in general and by separate types of publications are revealed. The main stages of his scientific and pedagogical activity are singled out, they were determined on the basis of the analysis of publications. The thematic distribution of publications and references is carried out. Conclusions. Biobibliometrical analysis of Serhii Lytvyn’s scientific work and his public activity made it possible to assess the breadth of his scientific interests, publication productivity, citations, thorough contribution to the development of military history, military affairs, petliurology (research of the Petliura issue), history of Ukrainian statehood and culture, record and archival sciences. The productive 30-year path of formation and development of the scientist and his scientific heritage, that includes more than five hundred works and scientific events, the organizer and participant of which he was, allows speaking about Serhii Lytvyn as a notable, colorful and interesting figure of scientific and educational space, historian, source and archivist, well-known petliurologist, researcher of military affairs, military history, history of the national liberation struggle of the Ukrainian people in 1917–1921, teacher, scientist with strong research dominant.