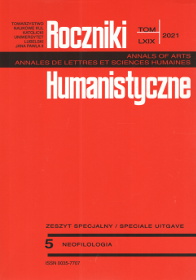 Summary/Abstract: It cannot be denied that historical figures, when literarized, are also coloured by their respective authors and how they can be found in the literary field and also played a role outside their literary context. The Author would like to assume a literary sociological point of view, and in this contribution the tension between the authority and autonomy of the author is linked to the characters he has created. In this research, the Author focuses on the Flemish hero Jan de Lichte and three authors who have written a work about Jan de Lichte’s gang. He starts with Ernest Ternest from Wetteren. It is interesting to consider for a moment the reputation and the life and work of popular writer Abraham Hans, who was born in (Sint-Maria-)Horebeke in a community now known as the Geuzenhoek, a small Protestant community in at that time predominantly Catholic Flanders. Finally, the Author looks at the role outside the literary field of Louis Paul Boon, who also called himself a tender anarchist, worked for a while as a journalist for the left-wing magazine De Roode Vaan and immediately after the Second World War sympathised with communist ideas.