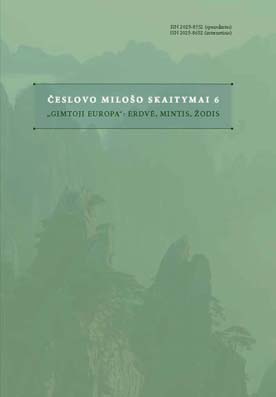 Lietuva ir lietuvis xxi a. Užsienio literatūroje: stereotipiniai įvaizdžiai
The Stereotypical Images of Lithuania and Lithuanians in the Foreign Literature of the 21stcentury

Summary/Abstract: Recently the issue of the image of Lithuania and Lithuanians in foreign literature has become more frequent in the works by comparative literature scholars: Algis Kalėda, Nijolė Kašelionienė, Irena Buckley, and Sigutė Radzevičienė discuss it in Polish, French, and Swedish literature. Though the issue has been a constant concern for the Lithuanians, it has become a topic of special interest in 2012 with the second publication of the novel “The Jungle” by Upton Sinclair (including the commentaries by Lithuanian literary scholars and Valdas Adamkus, the Former President of the Republic). Written at the beginning of the 20th mentury Sinclair’s novel depicts the harsh destiny of the Lithuanians of the first wave of emigration to the USA. Some books about Lithuanians and their lives inspire the discussions on the image of Lithuanians abroad, the understanding of small country, its realities, and their artistic interpretation. The reasons for the writers to take upon the Lithuanian theme are historical and socio-cultural: during different specific periods the increased Lithuanian emigrants’ flows or “waves” to other countries made it possible for the people of these countries to get acquainted and communicate directly with the Lithuanians, as well as to learn more about Lithuania. At the beginning of the 21st century the number of books written by foreign authors that touch upon the topic of Lithuania obviously increased because of specific historical circumstances, closer contacts and globalization. The article discusses the issue looking at three novels – “The Corrections” (2001, Lithuanian translation – in 2003) by the American author Jonathan Franzen; “A Glass of Milk, Please” (2006, translated in 2008) by the Norvegian writer Herbjorg Wassmo; and “Missing” (2000, 2009) by famous Swedish author Karin Alvtegen. The novels present mostly negative and unattractive stereotypical evaluation of Lithuania and Lithuanians: as a very poor country where people live in poverty (and even feed themselves on horse meat in “The Corrections”); as a country of human trafficking where naive young girls become prostitutes against their will (“A Glass of Milk, Please”); Lithuanians as potential criminals (in “Missing” the first idea which occurs to the narrator about the crime is that it might have been committed by Lithuanian mafia). While Franzen and Alvtegen have never visited Lithuania, Wassmo, on the contrary, visited the country and carried a thorough research of the problem of prostitution while staying here.