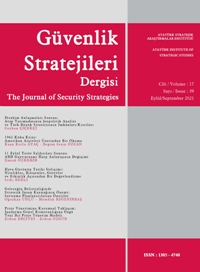 Summary/Abstract: The aim of this study is to explore the 1962 Cuban Crisis, one of the most important nuclear crises of the Cold War, through the American archival documents. Archival documents are especially important in that they reveal the influence of President Kennedy, who was at the top of the American decision-making mechanism during the crisis, in ensuring the coordinated work of institutions related to national security. As a matter of fact, in this context, the Executive Board of the National Security Council (The Executive Committee of the National Security Council/ ExComm) stands out as a platform where Kennedy convened several times a day during the crisis and where representatives of institutions related to national security express their views freely. Archive documents of ExComm meetings appear to be an important point in understanding the mechanical nature of the crisis process. In this sense, the study answers the question of what is the place of the leadership structure in the foreign policy decision-making process, depending on the national security of America on the verge of nuclear war, and what motives the leadership structure acted on. In this context, theoretical information will be included in the first stage of the study. In the second part, it is discussed what parameters have an impact on the road to the crisis. In the third chapter, while the development of the Cuban Crisis is discussed in detail in chronological stages, the thoughts of the American decision makers on the development of the crisis are examined through archive documents. At this point, the Foreign Relations of the United States (FRUS) documents of the US Department of State are supported and detailed with CIA documents whose secrecy degrees have been lifted. In the last section, the international environment that emerged with the end of the crisis was explained.