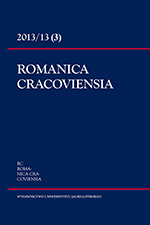 Summary/Abstract: The main problem discussed in the article is the meaning of the decision taken by Lhoussain Azergui who, after having engaged in the process of revitalization, finally opted by translating into French his novel originally written in Amazigh. The phenomenon of the emergent Amazigh literature can be understood in the perspective of trans-colonial renegotiation of Maghrebian identities. With Azergui, it enters a new field of experimentation, when the linguistic fidelity is broken to let the writer confront himself with a major literary language. It is a „betrayal with a promise of return” that can lead to a new stage in the development of Amazigh culture. Azergui’s novel justifies internally the option of translation. Its main subject is the necessity of crossing the borders of traditional mentality. The hero, a journalist leaving the prison, finds no place in his own community due to the ancestral believes considering writing as a magical gesture. The traditional culture finds the hero guilty of supreme transgression, which is punishable by death. The intellectual rejected by his own community has no other option than to seek alliances in the outside world, hoping to efface the frontiers between the local and the global.