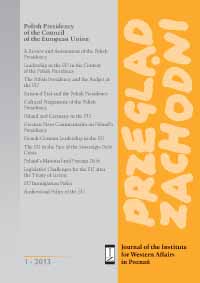 Summary/Abstract: Multilateral cooperation of the Member States of today’s European Union which is oriented towards the creation of uniform immigration legislation goes back to 1985 when the Schengen Treaty was signed. However, it was the ratification of the Maastricht Treaty on European Union that marked a turning point. When defining the areas of common interest the Member States indicated immigration, visa and asylum policy and declared to accept regulations on the crossing of external borders. The objective agreed upon was to suppress illegal immigration, residence and work in the EU of the citizen of third countries. Implementation of a unified immigration policy for the Member States of the EU proved to be especially important in the situation of an increased influx of people from the region of North Africa. Developments known as the Arab Spring and the migration pressure from North Africa triggered a debate on the necessity of reforming the EU’s immigration policy. The object of the reform is twofold. On the one hand, it is to increase the effectiveness of preventive measures against illegal influx of persons from third countries and their illegal residence in the EU. On the other hand, attention is drawn to constructing the EU’s immigration policy in such a way as to facilitate legal immigration with a view to the development and stabilisation of the European labour market.