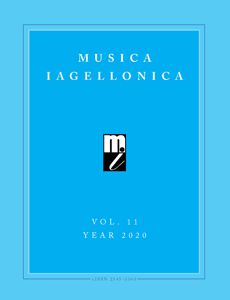 Summary/Abstract: The instrumental output of Nicola Porpora has not aroused great interest among researchers. For this reason, even the lists of his works in the most important musical dictionaries are incomplete. However, his instrumental works enjoyed considerable interest during the composer’s lifetime and even after his death. The purpose of this article is to draw attention to Porpora’s cello concertos. A closer analysis of previously known sources allows us to increase the number of such concertos by five pieces. Four of them have so far been considered to be trio sonatas, one has been preserved incompletely as an anonymous piece in the Library of Conservatorio di San Pietro a Majella (I-Nc, M.S. 84/5–8). These seven cello concertos, also known in sources as sonatas or sinfonias, were written when very similar pieces were created in Naples by Nicola Fiorenza, Leonardo Leo, Giuseppe de Majo and Nicola Sabatino. Although Porpora was already active in Venice and London at that time, he most likely wrote these works with the courts of Neapolitan aristocrats in mind — the Viceroy Aloys Thomas von Harrach, the Duke of Maddaloni and the Marquis De Simone.