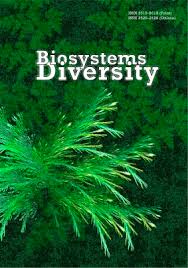 Summary/Abstract: Water quality assessment is a key task of any measures in the field of water use, environmental management and protection. Thus, it is necessary to conduct systematic monitoring to assess the ecological state in the marine waters and to develop a strategy for its recovery. Anthropogenic impacts of various types leading to eutrophication and pollution of the Black Sea are changing the main characteristics of all components of the aquatic ecosystem. Zooplankton plays a key role in the pelagic food web. This article presents the results of the research on the state of zooplankton which was conducted during the Ukrainian-Georgian expedition in the framework of the international project “Emblas-plus” during 2016, 2017 and 2019. The ecological quality class of the investigated Black Sea waters was determined by the zooplankton integrated index (IZI). In Ukrainian waters in total, 49 taxa of zooplankton were registered. In 2017 taxonomic composition of zooplankton was more diverse (36 taxa in 2016, 35 in 2019). In Georgian waters in 2019, 40 taxa of mesozooplankton were registered, most of them are widespread forms in the Black Sea. The most diverse group is Crustacea (Cladocera and Copepoda).The most prevalent crustaceans were the eurythermic species, an important representative of forage zooplankton – Acartia (Acartiura) clausi Giesbrecht, 1889 and two thermophilic species of Calanoida – Acartia (Acanthacartia) tonsa Dana, 1849 and Centropages ponticus Karavaev, 1895. In Ukrainian waters average abundance and biomass of zooplankton in 2019 was similar to those in 2016 and much higher than in 2017. Dominant taxa and spatial distribution of zooplankton in 2019 were similar to those in 2016 and 2017. Average biomass of forage zooplankton in 2019 was approximately 10 times higher than in 2016 and 2017. In the Georgian coastal waters annual average abundance and biomass of mesozooplankton decreased, due to a sharp decline in the abundance of Noctiluca scintillans (Macartney) Kofoid & Swezy, 1921. It was found that at most of the stations the dominant role in the formation of zooplankton biomass was played by the organisms of forage zooplankton. By the IZI index, the subdivision Northwestern Black Sea Bays had “Good”, “Poor” and “Moderate” water quality in spring, summer and autumn respectively. The subdivision’s deepwater shelf and shallow shelf had “Bad” water quality. The subdivision Danube-Dnieper interfluve coastal waters had “High” water quality. The Danube Avandelta area had “High”, “Good” and “High” water quality in spring, summer and autumn respectively. The best ecological class status was in 2019 and the worst – in 2016. The main tendencies in changes in the mesozooplankton community in the Black Sea are decrease in the percentage of N. scintillans in the total zooplankton biomass and increase in the percentage of Copepoda. Those tendencies indicate decrease in the pressure of the negative eutrophication factor and show positive changes in the forage base of commercial planktophagous fish and the ecological status of the Black Sea waters.