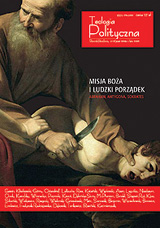 Summary/Abstract: The feature is a record of a conversation between Jerzy Axer, Dariusz Karłowicz and Marek Cichocki. The interlocutors reflect – in the context of the conflict between Creon and Antigone – on the conflict between politics and religion. According to Jerzy Axer certain attitudes are accepted in both politics and religion, whereas some others are very personal and depend on looking for a contact with God on one’s own and so violate the order of the community. The example of such behaviour is Antigone.