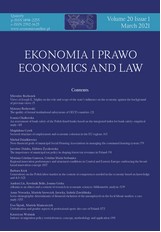 Summary/Abstract: Motivation: A great number of road investments are currently underway in Poland. Analysing their efficiency requires a range of forecasts and estimates which are not always corroborated by reality. This is due to both objective and subjective causes. Improvements to methods of analysing the efficiency of transport infrastructure investments can be based on ex-post analysis results. These results should serve to eliminate errors and consequently improve the quality of ex-ante analyses. Aim: The paper aims to identify, based on ex-post analysis, divergences between assumed and real properties of road investments that have key effects on the results of ex-ante efficiency calculus of the investments. Results: The study was based on selected investments in national and regional roads in the Świętokrzyskie region in 2007–2016. The ex-post analysis has shown that the capital expenditure and traffic volumes were overestimated, with ADT overestimation reaching nearly as much as 50% in four cases. Most investments were completed on time. There was a substantial delay in only one case. The overestimations of capital expenditure and traffic volume have a significant impact on the ex-ante evaluation of road investment efficiency, which may lead to misguided decisions when choosing the projects to be completed. The analysis results are a starting point for continuing the research and an indication of the need to improve the quality of ex-ante analyses.