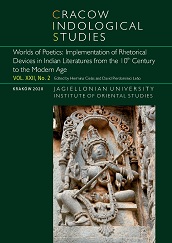 Summary/Abstract: The present paper proposes to investigate the perceptions of Kerala in the works of Uddaṇḍa Śāstrin, a remarkable scholar, who came in search of patronage to the court of Mānavikrama, the Zamorin of Calicut of the 15th century A.D, from Lāṭapura, a famous Brahmin centre in Toṇḍamaṇḍala, in Chengalpattu, in the present Tamil Nadu. Often stereotyped as a haughty outsider looking down upon his contemporaries with contempt, Uddaṇḍa was actually a sharp-witted scholar, who readily appreciated the scholarship of his adopted land, even while mincing no words when he encountered mediocrity. His message poem Kokilasandeśa and his play Mallikāmāruta, as well as many stray verses still current in Kerala, apart from being a veritable treasure of information as far as medieval Kerala is concerned, are of great cultural significance as they register the perceptions of a gifted scholar poet from the neighbouring land. Unfortunately, in popular imagination, he is projected as a haughty outsider outsmarting indigenous scholarship, but ultimately defeated by a native prodigy in the form of Kākkaśśeri Bhaṭṭatiri. This paper aims at retrieving Uddaṇḍa’s valuable and often unbiased insights of Kerala, which are often overlooked in popular perceptions of him. As a sensitive author who recorded his impressions on crossing the geographical boundaries of his native land to reach Kerala, his firsthand accounts of great cities, centres of learning, famous temples, food habits and festivals, such as Ōṇaṃ of Kerala, that can be found in his works are really worth probing.