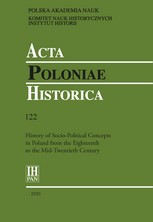 Summary/Abstract: This paper investigates the history of the concept of bourgeoisie in Poland, emphasising troubles with its assimilation into the Polish language, and its special entanglement with the socialist and modernist discourse. The concept, it is argued, was borrowed in the late nineteenth century from France, where it concerned the urban upper-middle class; it arrived in Poland as part of the socialist discourse of the time, which gave it strong negative and derogatory connotations. The ambiguity that arose was further complicated by a number of other factors as well. First, the understanding of the term ‘bourgeoisie’ within the leftist discourse was itself ambivalent, combining the strictly theoretical definition encompassing the class of capitalist owners of the means of production, and the practical and emotional label attached to the urban classes. Second, also for the reasons indicated above, the concept of bourgeoisie was not able to replace the older Polish concepts regarding the urban population [mieszczaństwo], and the differences between them remained vague, and occasionally disputable. Third, not only did the term ‘bourgeoisie’ never fully emancipate itself from the domination of the indigenous concepts, but it also suffered from its translation into Polish, where it was regularly omitted when regarding Western European realities, but where it was a permanent fixture in the case of Russian and Soviet literature. Finally, the paper searches for the reasons behind the relative elimination of the concept from the Polish discourse, or at least large segments thereof, in the last half-century.