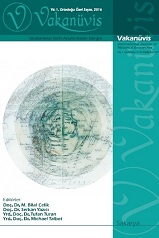 Summary/Abstract: In this article, the very secret departmental note annexes written by Major Norman N. E. Bray, who was a political intelligence officer attached to the India Office of the United Kingdom (UK) Government, on 18 November 1920 have been translated and analyzed. The first of the annexes is the text of the military-political agreement, whose written negotiations started with the famous letter of Mustafa Kemal to Vladimir Lenin dated 26 April 1920 and concluded in July 1920. The second annex is the telegram Kazim Karabekir sent to Mustafa Kemal in October 1920, stating the conditions under which the Bolsheviks asked Turkish Nationalists to be accepted. From the content analysis of the documents, it has been seen that the GNA Government agreed with the Bolshevik Russian Government long before the Moscow Treaty and that the Bolsheviks were very influential in the Atatürk Revolutions.