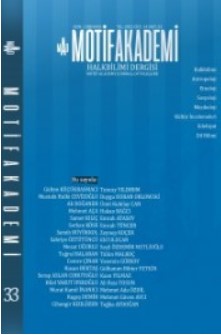 “BİTİSE KALIR SÖZ”: SÖZ VE YAZI İLİŞKİSİ AÇISINDAN KUTADGU BİLİG
“THE WORD REMAINS IF IT IS WRITTEN”: KUTADGU BILIG IN TERMS OF THE RELATIONSHIP OF WORD AND WRITING

Summary/Abstract: "Kutadgu Bilig" is one of the first written works of Turks, who were included in a new cultural environment with the acceptance of Islam. The work, which deals with the ideal state and social order, is extremely important as it allows to identify the mentality and perception of the period in which it was written by converting it into a written text. The article will focus on the perception of "word" and "writing" in the 11th century, based on "Kutadgu Bilig" as a written text in the context of the written cultural environment. In the text called "If the word is written, it remains", the writing that creates a different communication style with the transition to the written culture environment is glorified. Since the writing fixes by saving the word, it represents the permanent against change. This feature of writing, which enables it to be glorified, also leads to the defective aspects of the written communication style. In the work, it is seen that the writing is superior to words because it helps to keep accounts, record the date and keep records. The permanence of writing has been in favor of writing in the face of human mortality. Although it is seen that the written word is considered more effective than the spoken word, the reliability of the word continues.