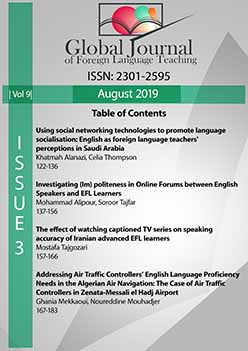 Summary/Abstract: The present study aimed to find out the effect of watching captioned TV series on speaking accuracy of Iranian advanced English as a Foreign Language (EFL) learner. To do so, 66 advanced learners were selected out of 104 ones, using Oxford Placement Test. The researchers assigned the participants randomly into three groups, one control and two experimental, each including 22 learners. One of the experimental groups watched the series with English subtitles and the other group with Persian subtitles while the control group (CG) watched the same series without any subtitles. The form of the pre-test and post-test was semi-structured interview. Before the treatment, the participants were asked questions about friendship, similar to the theme of the series and after the treatment they were asked the same questions as the post-test. The results indicated that both English and Persian subtitling had a positive impact on the accuracy of Iranian advanced English learners. Furthermore, it was found that oral accuracy did not considerably change in the CG, but there were significant improvements in English subtitle and Persian subtitle groups in oral accuracy. Moreover, the study has insights and implications for EFL/English as second language teachers and curriculum designers.