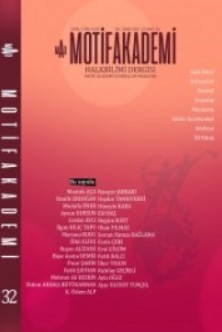 Summary/Abstract: Fashion is not only a form of aesthetic understanding, but also a socio-cultural phenomenon that contains strong connotations, takes shape by being influenced by many areas and is constantly changing. Particularly, the effects of world war period, during which great crises were experienced, on fashion and clothing brought along a formal and aesthetic transformation in women's clothing, as well as a number of obligatory sociological effects. The main purpose of this study is to investigate the reflection of war on women's image, fashion and clothing by examining the covers of World War II period semiotically. At the same time, it was tried to determine how fashion was shaped by the effect of the period, together with its symbols and connotations. The population of the study consists of 143 Vogue magazine covers published during the Second World War. The sample was determined by the purposeful sampling method, with a total of three magazine covers, one from 1942, 1943 and 1944, when the United States was active in the war. In the study, Vogue magazine covers were examined semiotically through Roland Barthes' semiological scheme, the connotations of the women's photographs on the cover were interpreted through cultural codes, and the written signs were, on the other hand, interpreted by examining the slogans on the cover. The effect of the period on the fashion and dressing sense were studied through the interweaving theory that had been adapted from the intertextuality theory to fashion and created by T. F. Broden. As a result, it has been observed that the image of women on Vogue magazine covers reflects a patriotic, benevolent, peaceful, self-sacrificing woman, who is at least as active as men during the war and has a voice, ready for duty, and a strong woman.