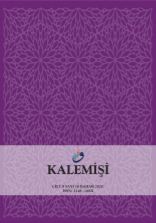 Summary/Abstract: Hats have been used throughout history as an important complement to clothing. Also hats; It is one of the head decorations reflecting the gender, status, belief, period of use and traditions. Like all other clothes, hats were first used for protection purposes. Over time, in addition to the purpose of protection, different areas of use emerged and as a result, it diversified and continued its life. The hat has been an important accessory for both men and women. Men's hats have also experienced periodic differences and changes just like women's hats. With the effects of the period requirements and fashion, there have been changes and the hats have changed shape. They came to life in the hands of masters using different techniques and molds. Mustafa Mollaoğlu, who gives life to these hats, is one of the last hat masters. Mustafa Mollaoğlu, who lives in Aksaray and has been making a living for years by making hats; He makes a "cap" which is one of the men's hats. Beanies are like other head decorations; It is one of the important men's hats because they reflect the characteristics of the period to which they belong. While the five-pointed model was used as a cap, over time, eight-cornered, buttoned and sports models were also included. When hats are examined, it is seen that there are not enough studies on men's hats. Purpose of the research; To introduce Mustafa Mollaoğlu, the last hat master of Aksaray, and to document the construction stages of the "cap". This work is limited to Mustafa Mollaoğlu's workshop. As a method, mutual interview method was used. The scope of the study; The life and work of Mustafa Mollaoğlu is the making of caps and caps.