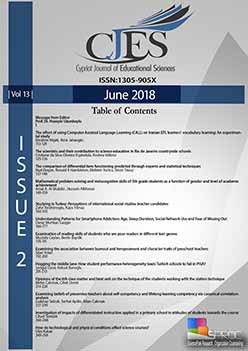 Summary/Abstract: The aim of this study is to examine high school students and uncover the relationships between Smartphone Addiction levels and certain factors such as (a) Fear of Missing Out (FoMO) (b) Social Networking Site (SNS) usage habits (using smartphones), (c) age, d) sleep duration and (e) duration of smartphone ownership. The study group consists of 161 students from two public high schools in Turkey. Two different scales were employed for data collection; namely, the Smartphone Addiction Scale and FoMO Scale. Based on a cross-sectional research method, this qualitative study makes use of Pearson Correlation and Stepwise Multiple Regression statistical tests. Findings have shown positive correlations interpreted as Smartphone Addiction increasing with greater student age, daily duration of SNS use on smartphones, duration of smartphone ownership, and Fear of Missing Out. In addition, there exists negative-correlation between smartphone addiction and sleep duration, as well as frequency of SNS use on smartphones. Last but not least, it has been shown that FoMO, daily duration of SNSs use on smartphone and duration of smartphone ownership predict smartphone addiction, with the FoMO variable being the strongest predictor.