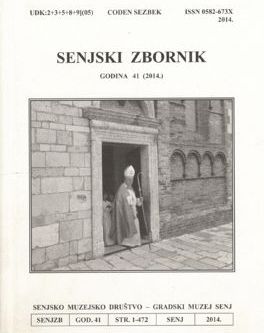 Summary/Abstract: The author concisely and comprehensively looks back at the results of the investigation of the Glagolitic press (particularly its publications), which operated at the end of the 15th century and in the first decade of the 16th century. Local religious intellectuals founded it for their own needs: in order that with it they implemented a publishing programme in which the Glagolitic priests would provide basic liturgical books, contemporary church handbooks and religious(literary) works that they mainly issued in the European Christian West. Prepared for printing first was a Glagolitic breviary. It was prepared by Canon Blaž Baromić, a talented scribe. He took the prepared manuscript to the printing workshop of the reputable Andrija Torresanija in Venice where the Brevijar was printed. Baromić supervised the printing and revised the text. Whilst with Torresanija he studied and mastered the skill of printing. From Venice he returned to Senj with the printed Croatian Breviary, completed on 13th March 1493. Along with the Brevijar he transported to Senj a printing press, lead letters and other equipment necessary for the independent work of a printing workshop. By 7th August 1491 thefollowing had been published by the press in Senj: Misal; 25th April 1496. Spovid općena, a translation of the Italian manual of general confession Confessionale generale (M. Carcano). In the 15th century Ritual was probably published with Meštrija dobra umrtija (Ars bene moriendi / Art of dying well) of which two incomplete copies have been preserved – without beginning and end, which means without the date of publication. In Senj in 1507 also published was Naručnikplebanušev ali popov, a translation of the popular pre-Tridentine catechism Manipulus curatorum. In 1508 three books were published: on 5th May Transit sv. Jerolima, a translation from Italian (Venetian publication from 1487: Transito de s. Girolamo); 15th June Mirakulislavne Deve Marije, a translation from the Italian collection Miracoli della gloriosa Vergine Maria; 17th October Korizmenjak, a translation of Lenten sermons Quadragesimale volgare, which was written by the renowned preacher Caracciolo. The books were translated into the Chakavian dialect, enriched with elements of Church Slavonic language “which was in the foundation of the then speech of Senj.” Translators of Senj’s publications called their language Croatian. As good linguistic material Senj’s non-liturgical editions entered sources from which a monumental historical Rječnik hrvatskoga ili srpskoga jezika (Dictionary of the Croatian or Serbian Language) was made by the Yugoslav Academy of Sciences and Arts. The liturgical Senj Glagolitic editions were printed in the Croatian Church Slavonic language. Original copies of the books are very rare, but the Croatian Academy of Sciences and Arts and the Senj Town Museum re-published three editions (Misal, Spovid općenu and Korizmenjak). With the republications the research of Senj’s press and its publications has advanced in recent times: each edition has been described in detail (outer description, contents, font and type); for some editions a direct template was identified; preserved original copies are listed and where they are found: the editions are researched as typographical products, that is as objects whose form and contents are determined by the printing and handicraft processes etc.