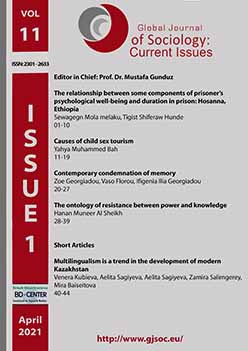 Summary/Abstract: The development years of sovereign Kazakhstan show that polylingualism in the society not only infringes on the rights and dignity of the Kazakh language but also creates necessary conditions for its development and progress. According to the state programme for language development, three languages’ priority has been approved: Kazakh, Russian and English. In addition to Kazakh as the state language and Russian as the language of inter-ethnic communication, English is an essential means of communication. The most important strategic task of education in Kazakhstan is, on the one hand, to preserve the best Kazakh educational traditions and, on the other hand, to provide school leavers with international qualifications and develop their linguistic consciousness, based on mastering the state, native and foreign languages. Meanwhile, as specified in the concept of language policy of RK, the main difficulty in further realisation of language policy in Kazakhstan is ‘creation of optimum language space of the state’. On the other hand, we are talking about a professional gap in specialists’ training,studying Russian and Kazakh language. Our study used the following methods: UNT 2015–2019, a survey of first-year students of ARGU named after Zhubanov. The results of the study can be used to develop a methodological complex for training foreign language teachers