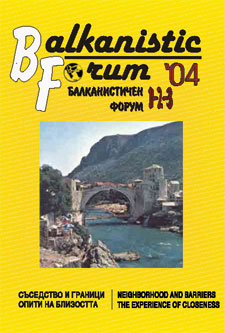 Summary/Abstract: This is a historical overview of the destinations preferred by builders (dung’ueri) coming from the central part of the Balkan Peninsula. By the year 1878 the major routes lead to both Istanbul as the capital of the Ottoman Empire and the autonomous Serbia and Wallachia. After the Liberation of Bulgaria its newly proclaimed capital Sofia turns into an attractive centre for all the earners (pechalbari) from the regions of Trun (Bulagria), Pirot and Vranje/Crna trava (Serbia) as well as from Eastern Macedonia. The paper traces their participation in national-liberation uprisings such as the one in Trun (Shopsko vastanie) in 1877. It draws the attention to some of the specific features of earners. life in Sofia and to the impact of those earners on the economic development of the regions where they come from.