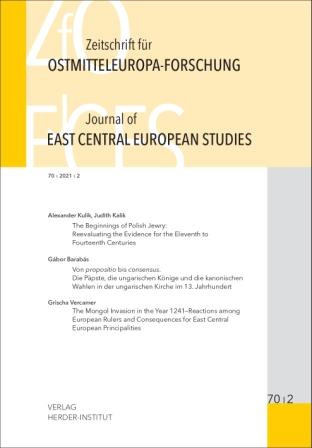 Summary/Abstract: This article reexamines the evidence of Jewish presence in Poland from the eleventh to the fourteenth centuries in connection with problems of origins, periodization, and localization of Jewish settlement in Poland. It deals inter alia with questions regarding the balance between Jewish and Christian evidence, as well as with reports of Jewish presence from neighboring areas of Eastern Europe such as Kievan Rus’. The reevaluation of evidence on medieval Polish Jews helps to illuminate the origins of eastern Ashkenazi Jewry, as well as to clarify diverse aspects of the history of early Eastern Europe. Thus, for example, among the most important general conclusions is the lack of continuity across three waves of Jewish migration and settlement in Poland. Since most Polish Jews were descendants of the third wave of Jewish migration into Poland, there is little doubt that the vast majority of them came from Germany and Bohemia, mostly via Silesia. We can also reliably conjecture that the Jewish population of southwestern Rus’—whatever its origins (possibly also at least partially Ashkenazi) and size (possibly reduced by the Mongol conquest)— came to be integrated with immigrants from the west due to the eastward expansion of Lithuania and Poland during the thirteenth and fourteenth centuries. Thus, most modern Ashkenazi Jewry must go back to the melding of these two communities.