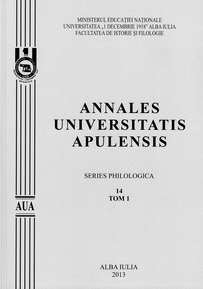 Summary/Abstract: The story entitled Sacrifice & Flag can be considered a successful foray into the history of an ancient custom practiced in Izvoru village, a custom which offers the necessary pretext for the narrative art of the eighties writer Dumitru Ungureanu to be brought forward. The author skillfully uses techniques and procedures specific to the eighties generation, but succeeds not to abuse them in order for the narrative not to be affected. Irony and self-irony, parodic references to other texts, metalepis, textualism, alternating narrators, fragmentation, the theories regarding the autonomy of the text and the disappearance of the author from the text are used by the author in order to construct a text whose still visible fundamental trait is the verb, the saying. The author does not fall into the trap of self-reflexivity and avoids the excessive technicism in time, returning after each temptation to textualize to the lucidity of the one for whom the charm of the writing lies in the dynamism of diegesis. Structurally, the story is composed of three parts, separated by a pause that allows the narrator to express his views on textualism. The last part, linked to the first ones by resorting to the mythical plan, distinguishes from the others by allowing multiple interpretations and bringing forth an extradiegetic narrator. Although published relatively late, in 1999 - Dumitru Ungureanu's story demonstrates the author's affiliation to the eighties generation, the reference to the mythical and fantastic plan being easily traceable in the volumes following to this one. Dumitru Ungureanu's volume reveals an author in his creative maturity, for whom writing equals to rivaling the world and who declares through one character's voice that he writes for the pleasure of writing, pleasure that that he forwards to the reader sublimed without fall in the pleasure to read.