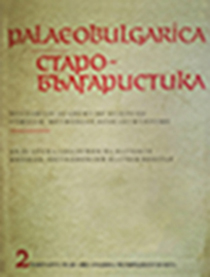 Summary/Abstract: Among the few preserved works of Theophile of Alexandria there is the short Sermo de morte et de iudicio (CPG 2618). It was not only translated into Syriac, Arabic and Armenian, but also into Old Church Slavonic (Old Bulgarian). The work is found to exist in the Middle Bulgarian (from the 13th century), Serbian (from the 14th century) and East Slavonic (from the 14th century) recensions. A series of redactional changes can be observed, e.g., an East Slavonic one, as well as one that gave rise to a separate branch consisting of the Athonite MS together with the MS from Zagreb (Miscellany of Pakrac). Analysis of the language of the Slavonic text shows a limited number of syntactic archaisms (e.g., the adnominal dative translating the Greek genitive). In addition, the vocabulary is significantly close to the East Bulgarian Preslav school. Indeed, it can be reasonably surmised that the translation originated during the 10th century in East Bulgaria, in the context of the literary school of Preslav. At the end of the paper, the oldest copy from the Middle Bulgarian Mihanović Patericon (Cod. Vindob. slav. № 137 (152) is published.